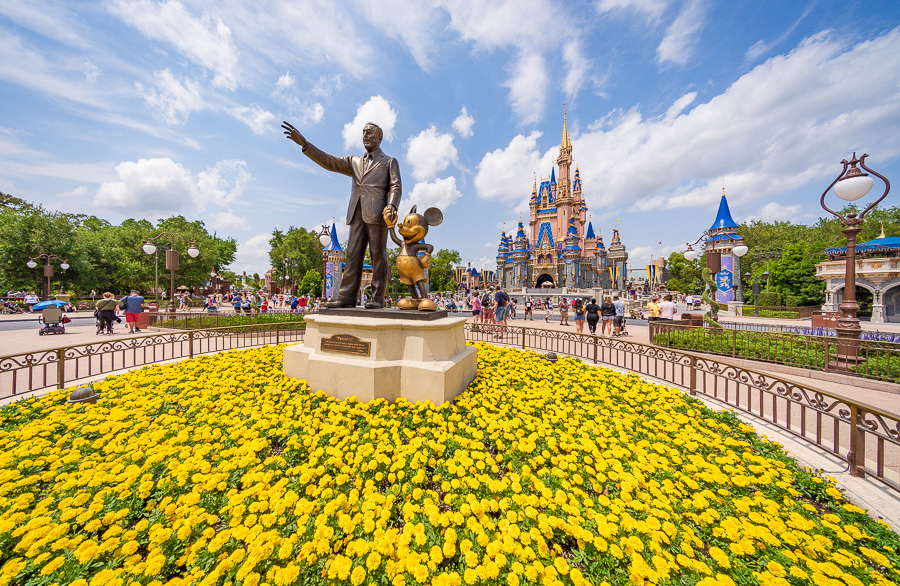 We are back with another COVID-19 report covering new case, positivity, and hospitalization data from Orange County as of January 7, 2022. Plus, on-the-ground commentary and an optimistic update from the University of Florida’s model, which projects when the Omicron-driven surge will peak, decrease, and play out.

With begin with the usual preface–that these are data-driven reports with the goal of sharing news that may be relevant to out-of-staters planning or on the fence about a vacation to Walt Disney World. The updates distill data and information from multiple sources, in an attempt to offer analysis free of hyperbole and sensationalism–just a straightforward report on current circumstances in Central Florida.

That has never been an easy task given the polarized perspectives on how Florida has handled the pandemic. It’s increasingly difficult now, as some of this data does not speak for itself, and requires additional contextualization. We’ll try to offer that sparingly, deferring to experts as much as possible. With that said, let’s begin…

Florida reported 76,887 new COVID-19 cases on January 7, 2022, which is the state’s highest daily number of the pandemic, according to data from the U.S. Centers for Disease Control. This surpasses the previous record of 75,732 infections set on December 30. Since our last COVID report, Florida has broken its past daily record for new cases several times, with a rolling 7-day average that now stands at 56,759 cases (also a record). These numbers far surpass last holiday season’s surge and the Delta wave late this summer.

Testing positivity rates have soared from their pre-Omicron levels in the 5% range, which is what the CDC considers controlled spread. Orange County’s average positivity rate currently stands at 40.4%, the highest in the state. That puts it squarely back in the red/high tier of the CDC’s Community Transmission Map, which is based on positivity and incidence numbers.

After ranking 49th or 50th in the United States for a couple of months, Florida now ranks 6th among states for average daily cases over the past week with 264 per 100,000 people. Reported COVID death reports have remained low in Florida during the Omicron surge, and the state ranks 49th with a 7-day average of 0.09 daily deaths per 100,000 people, behind only Alaska.

One difference between the Delta and Omicron waves is that the entire United States is experiencing something similar–not just the South. The country is now averaging 586,391 daily cases, up from ~200,000 around Christmas. That average continues to increase, and earlier this week the U.S. reported nearly 1 million cases for a single day.

The current spike is being driven by the more transmissible Omicron variant, which is now the most dominant strain in the US. Omicron accounts for 95.4% of new cases less than three weeks after the first was reported in the United States, according to new estimates by the CDC, with Delta constituting the remaining ~5%.

Standard COVID test results don’t distinguish between Omicron, Delta or other variants, but labs are able to sequence the genome of the virus to identify the strain that caused a positive test. Additionally, wastewater analysis can identify the strain. Orange County Utilities have indicated that their testing has found almost 100% of the strains in the samples are Omicron. 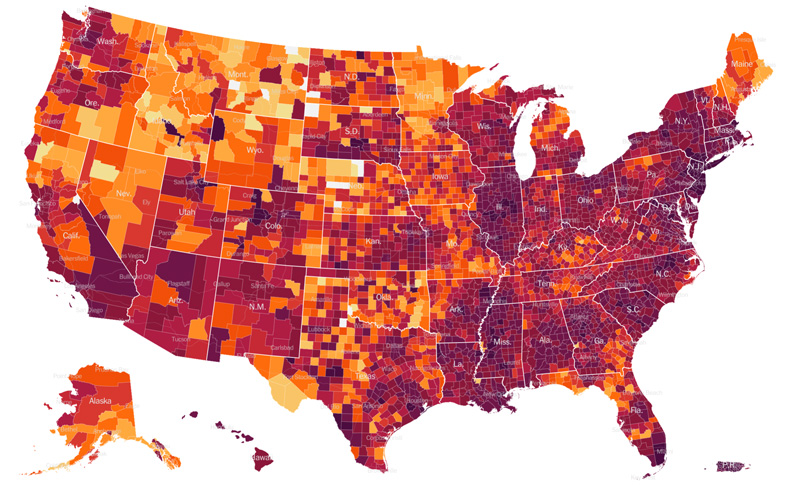 For anyone who would like to take a deeper dive into the data, consult the below resources for numbers reported and compiled by local, state, and national organizations: 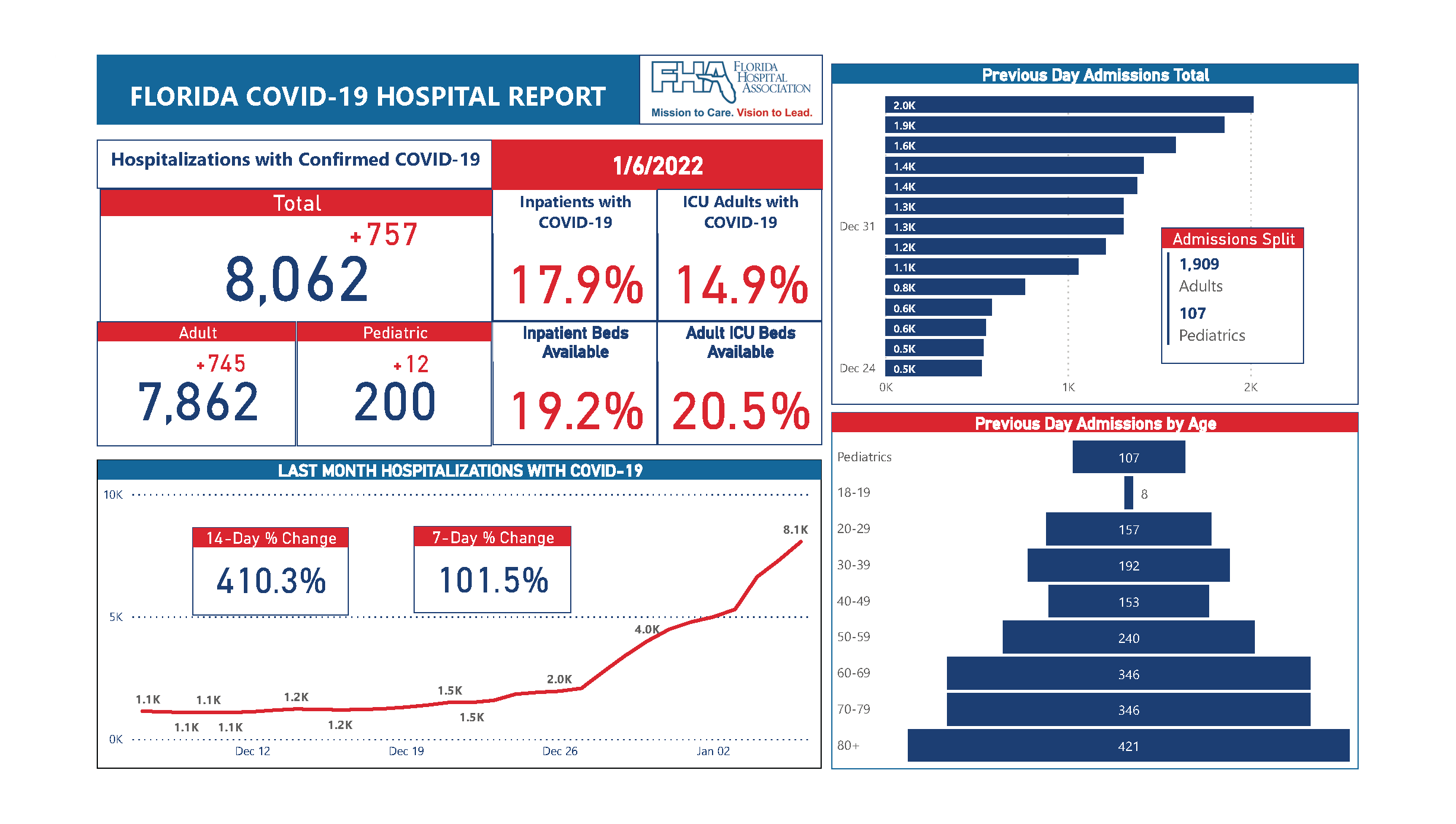 With that said, there are a few important caveats. First, hospitalizations usually lag cases by a couple of weeks. While Florida is likely approaching its peak in new daily cases, the same cannot be said (with a high degree of confidence) for hospitalizations.

However, there has been a decoupling between cases and hospitalizations in places where Omicron was detected early and has progressed further. In particular, South Africa and the United Kingdom have not had anywhere near the level of hospitalizations as they did during prior waves. So even with exponentially more Omicron cases, it’s also likely that Florida won’t surpass hospitalizations at the Delta peak. 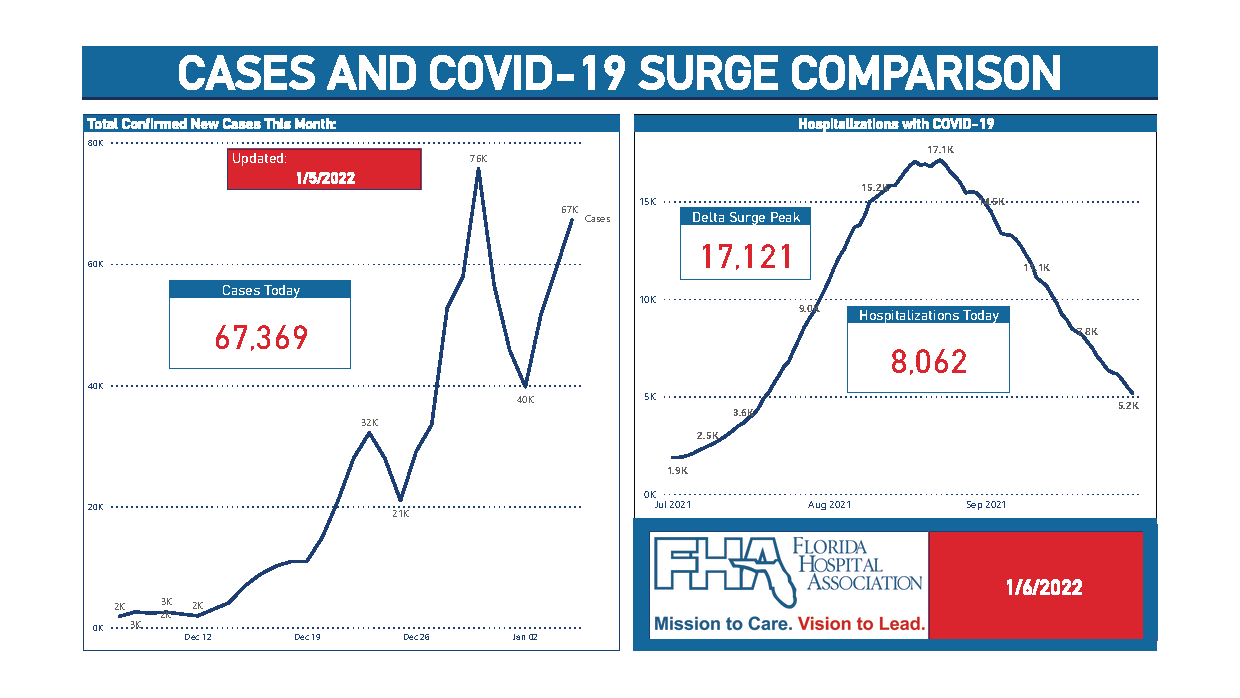 Next, hospitalizations remain disproportionately among the unvaccinated. While it’s true that breakthrough cases are becoming much more common–even among those who have been boosted–that has not translated into hospitalizations in either the Delta or Omicron waves. Statistically speaking, vaccination protects well against severe illness and hospitalization at this time.

Finally, as community prevalence of Omicron increases, so too do the number of incidental hospital admissions of people with COVID-19 who were admitted for non-COVID reasons. For example, if 30% of people in an area are infected by the highly transmissible Omicron variant at any one time, it follows that roughly the same percentage will test positive for COVID-19 when presenting to the hospital for other reasons.

Jackson Health System hospitals currently have 496 patients who have tested positive for COVID-19.
Of those, 248 patients – or 50% – are admitted to the hospital primarily for non-COVID reasons.
Of the 496, 113 are vaccinated, 55 of whom are immunocompromised transplant patients.

This has been a blind spot of reporting for the last year-plus, but has become a more pronounced problem with Omicron due to its transmissibility, community prevalence, and milder symptoms. In other words, more people have asymptomatic infections and don’t realize it when showing up to the hospital for totally unrelated needs.

This is increasingly common in Florida. As of today, Jackson Health System hospitals currently have 496 patients who have tested positive for COVID-19. “Of those, 248 patients – or 50% – are admitted to the hospital primarily for non-COVID reasons,” the hospital stated in a tweet (see above).

When discussing increased hospitalizations of children, hospital officials have stated that this is common. “We test anybody who’s admitted to the hospital for whatever reason to see whether or not they have Covid, and we’re definitely seeing an increase in cases. However, we’re really not seeing an increase in children who are hospitalized for Covid or in the intensive care unit for Covid,” Dr. Paul Offit, a vaccine expert at Children’s Hospital of Philadelphia, told NBC News.

More hospitals are starting to make this distinction, but there still is not quality statewide or nationwide data breaking down hospitalizations on an incidental versus causal basis.

On an optimistic note, researchers at the University of Florida have released a new report based on updated modeling (here’s the summary). Their main finding is that the Omicron wave is estimated to peak earlier than previously reported, in mid-January 2022. Actual infections are forecast to peak even earlier–and that may have already occurred according to the model.

As background, the University of Florida’s model has accurately forecast past waves (including Delta). In addition to projecting a mid-January 2022 peak in reported cases, it predicts that the Omicron wave in Florida is likely to cause many more infections than occurred during the Delta wave, potentially infecting most of the state’s population in the Omicron wave alone. (Outside of the report, one UF biostatistician indicated the number would be around 80% of Floridians.)

University of Florida researchers concluded that due to limitations in testing capacity, milder infections in the fully vaccinated, and reduced sensitivity of some tests to the Omicron variant, a smaller fraction of omicron infections will be detected as cases compared to previous waves. In fact, their model shows approximately 10 times as many daily infections as reported cases. (The graph above shows modeled infections–note that the Delta wave is a blip relative to Omicron.)

They also conclude that despite causing significantly more infections, it is possible that substantially fewer deaths will result from the Omicron wave. UF researchers estimate that Omicron will cause approximately one-third as many deaths as were caused by Delta. The University of Florida’s full report includes a range of other findings and graphs, and is worth a read. 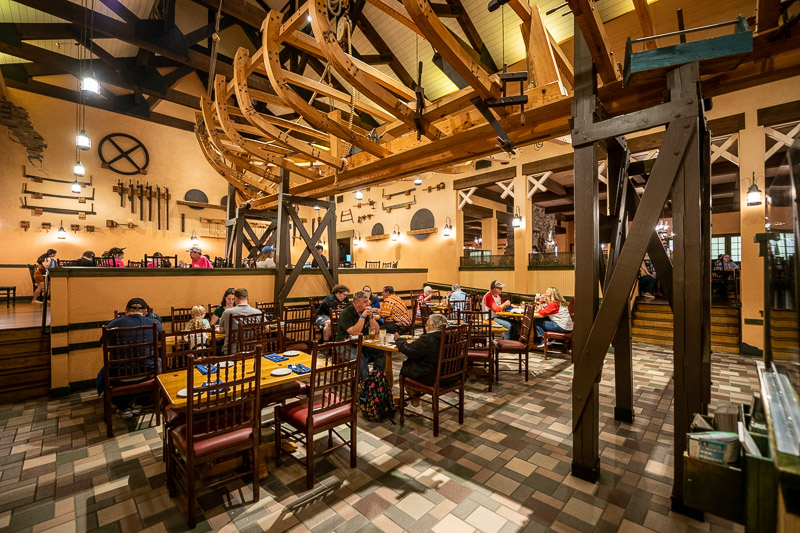 Next, let’s turn to an on-the-ground report from Central Florida. Anecdotally, we’ve heard from more people in the last two weeks who had confirmed or suspected cases than even during the Delta wave. Many Cast Members who worked and guests who visited during the holidays were infected.

For a variety of reasons, the sentiment that Florida theme parks are “safer than grocery stores” is no longer true. This really shouldn’t be surprising given community prevalence in Central Florida and crowd levels–it’s basically a numbers game. This isn’t to scare or discourage you from living life or visiting the parks (we still are!)–it’s more to encourage adjusting your expectations in light of transmissibility and community prevalence. It should go without saying, but the circumstances are dramatically different from mid-2020; there’s much more reason for optimism even against the backdrop of record case numbers. 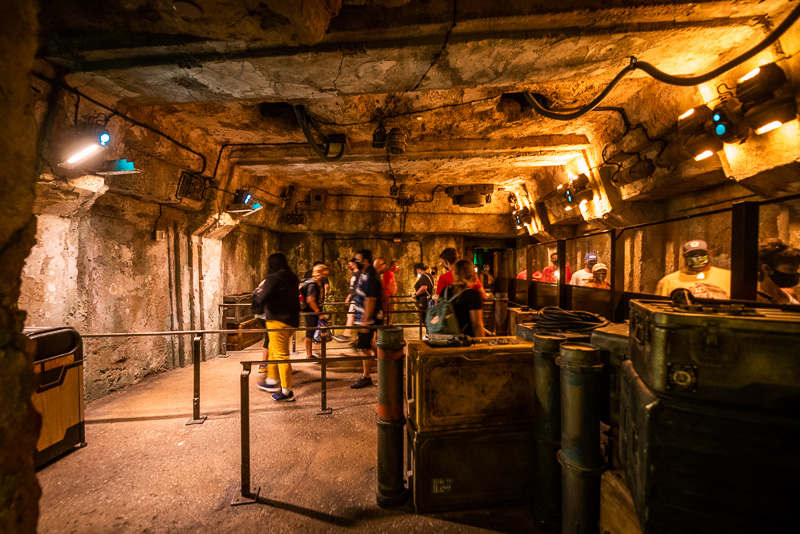 Since Delta, we’ve been using at-home self tests on occasion–before traveling, after confirmed exposure, or when we’re going to be around family. (So far, so good!) We recently ran out of those, and have had an incredibly difficult time finding more. Amazon has been backordered, and there’s next to no availability at any Walmarts, CVS, or Walgreens within a 15-mile radius of us (despite many of the aforementioned store locations).

Moreover, paid testing locations near Walt Disney World didn’t have any appointment availability within a week. Lines at free locations have been hours-long, filling early in the morning. This has started to ease up a bit with the holidays in the rearview mirror and will likely further improve in the coming weeks, but it’s definitely still an issue as of right now. Something to keep in mind for those of you who are required to test before traveling home this month or in February 2022–make your appointment now. (If you just want to test for peace of mind, plan ahead and bring your own self tests.) 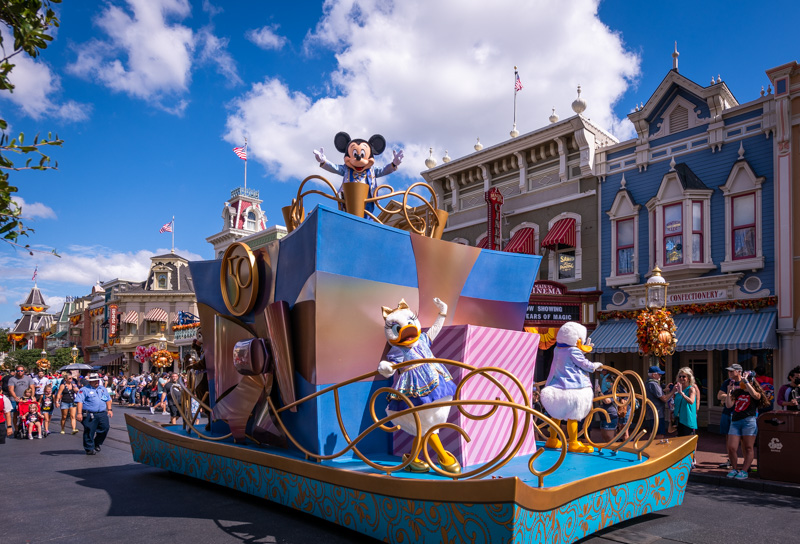 We’ll conclude by basically rehashing some commentary from our last COVID report, just in case you missed it during the hustle and bustle of the holiday season. Essentially, Omicron’s transmissibility and soaring case counts are not the whole story.

More relevant is that the United States population is no longer immunologically-naïve, due to said inoculations and past infections. Antibody levels fall over time–if they didn’t, your blood would be as thick as sludge, full of antibodies from every pathogen to which you’ve ever been exposed. Protection against severe disease still exists due to durable immune memory of B and T cells. This is nuance that has been lost in a lot of the doomsday reports about breakthrough cases, waning antibodies, and the latest variants.

In plain English, durable and long-lasting population immunity dramatically decreases severe outcomes in future waves, flare ups, or variants that may emerge as COVID-19 becomes endemic. We’ve recommended it before, but here’s a great read about what our end game should be. That discusses the need for Americans to recalibrate their expectations, as preventing all infections or eliminating coronavirus is not a realistic goal. Zero COVID is a fantasy, destined to fail even where it has ostensibly succeeded up until now (at great societal cost).

The salient point is that widespread vaccinations and past infections will turn COVID-19 into something more like influenza. If you’re vaccinated or have been previously infected, you are likely well protected against severe disease from future infections. In life, there is no such thing as eliminating risk–only mitigating it.